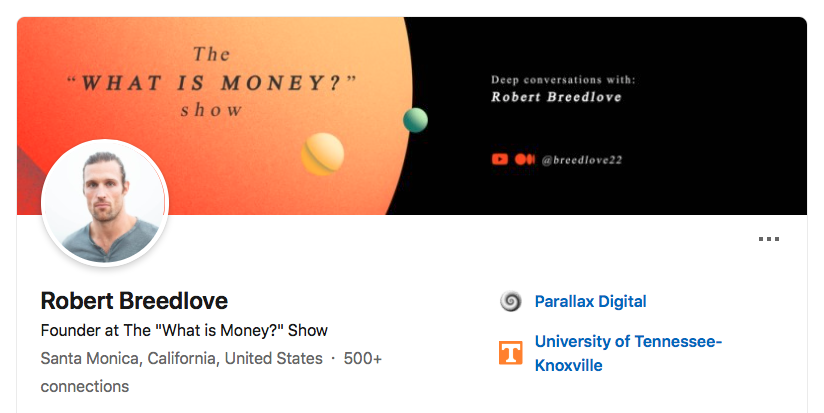 The world we are living in is full of fraud and con artists. After Wall Street, the last decade’s new gold rush is Cryptocurrency with Bitcoin leading in this digital currency domain.

The currency we use daily as our payment system is FIAT money. FIAT money is in its final era, as more and more people realize that our money that is issued by the Central Bank is not backed by anything of value, in this case, gold. Money hasn’t been backed by gold since 1971 when former US President Richard Nixon took it out from the gold standard and put an end to Bretton Woods Agreement.

Since, the value of money such as the USD, Euro, British Pound Sterling, Japanese Yen, Australian Dollar, and other world currencies that are not backed by gold or anything of value has diminished and the trust people have in their monetary systems in these countries have been broken.

Bitcoin was born in 2009 with the idea to create another monetary system that is not controlled by the Central Bank which is owned by a cartel or a very few powerful oligarchs. It hasn’t stopped gaining popularity since for its perceived independence from the Central Bank also the fact that some people get rich quick becoming newly minted millionaires by owning and trading bitcoin.

Now with the more massive printing of money (Quantitative Easing) ever seen in the history of mankind by the Federal Reserve or the US Central Bank which resulted in the rapid devaluation/debasement of USD and hyperinflation, cryptocurrency has been on the rise again as people try to find a safer alternative to their FIAT money.

This creates a very unstable volatile money market as there is no trust in the government and the monetary system, which is creating an opportunity for speculators, traders, and other financial actors to take advantage during this very uncertain time window. Here come the charlatans, fraudsters, scammers, financial gurus, etc to defraud the gullible unknowledgeable masses and reap huge wins out of their ingenuousness. To make matters worse, economic and financial truths are not really taught in school or university. In my MBA at supposedly one of the most prestigious business schools, basic economic fundamental such as money was never taught, also important topics such as the financial crisis. Hence the public’s confusion and incomprehension about what is money.

Currently, some Cryptocurrency “pundits” have been given platforms in Media and other channels to preach people about the virtue of Cryptocurrency such as how it is the most democratic currency that will save mankind and humanity from centuries of enslavement, and to propagandize their estimated outlook on the future of Bitcoin and other cryptocurrencies. In this group of so-called “pundits” is a certain man with dubious credibility but with such bewitching good looks, none other than Mr. Robert Breedlove. 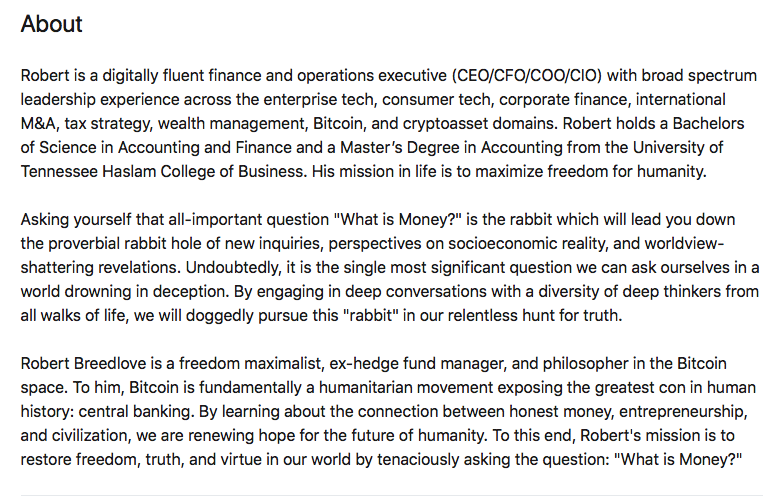 Robert Breedlove described himself as Bitcoin Philosopher and Freedom Maximalist, he is also the Founder and CEO of Parallax Digital. He also stated on his Linkedin page that he is an ex-hedge fund manager, even though I couldn’t find it in his resume on Linkedin.  Either he doesn’t list this quite of an achievement of his which is implausible considering his proclivity for being pretentious or he actually had never been a hedge fund manager.

Mr. Robert Breedlove was invited by Kitco News to share his views and answer some questions regarding Bitcoin. Below you can find the video of his interview or you can go see it directly on Kitco News’ website.

Here is the list of my comments and arguments regarding his forecast outlook and statement about Bitcoin:

My question is How can it be disruptive to gold? Gold for centuries has been the most solid trustable precious metal. Bitcoin can be disruptive to USD or any other FIAT money as they are both unbacked money/currency, but to Gold I doubt it. Because Gold besides being money/currency is also an Asset. Gold is valued by people as a precious metal and it has its use, since centuries it has been used as jewelry and other precious decorative or art objects which makes Gold an asset. Gold also serves as money in the form of gold coins such as in the Roman Empire and in our current times gold bar and gold still act as money/currency to this day.

Digital currency such as Bitcoin and our FIAT money instead are questionable as assets. Our FIAT money is not an asset, because it is not backed by anything of value, whose value only depends on the value of its paper, hence should be called paper money. Unless we start to consider paper as a valuable asset that is preposterous to the extent blasphemous to the economics science.

Whilst the value of Bitcoin is only in the cost of mining bitcoin. Unless Bitcoin is backed up by gold, real estate, or anything considered valuable or of value, its asset value rests only on the cost of mining (or producing) bitcoin. The character of Bitcoin as an asset or categorizing Bitcoin as an asset is still debatable. Because Bitcoin is lacking its usability function. The need or use of bitcoin or other cryptocurrencies as money only arises because of the lack of or in-existence of trust in our current FIAT money whose value is being debased or eroded as time goes by. Cryptocurrency could serve as money/currency but fundamentally very weak to be treated as an asset or store of value, therefore couldn’t be really considered as an asset.

As long as Bitcoin and other cryptocurrencies are not backed by anything of value, they will be just another FIAT digital currency.

2) Minute 2:53: “Government and Central Banking itself is an apparatus build on top of gold.”

As previously explained in the second and third paragraph of this very essay, Government and Central Banking’s creation or issuance of money is not build on top of gold instead it has never been based on gold since 1971.

This is the section where the water gets muddied and the lines between money, asset, and investment start to be blurred to create confusion.

The editor-in-chief of Kitco News, Michelle Makori on minute 8:04 asked: “Can we really say that an asset or a currency with so much volatility is a store of value because that’s one of the concerns raised this week with the crazy volatility we’ve seen?”

By asking this question Michelle Makori falsely mistaken asset as the same as currency and equal the two as a store of value. She categorized asset, currency, and a store of value as all the same and throw all of them in the same basket/group. Either she deliberately did this as part of the agenda of the program or she really had no idea of what she was talking about. To which Robert Breedlove keenly “took the bait” and further elaborated the confusion and muddied the water even more.

Asset, money, currency, investment, and a store of value are not all the same and whose meanings should not be blurred and throw altogether into one basket. An asset could serve as a store of value and as an investment, such as real estate and precious metals. Money is not a store of value considering it is FIAT money and its value is declining the more the QE (Quantitative Easing) the Central Bank does, but money serves as a tool/means for exchange of products or services.

Further, on minute 8:42, Robert Breedlove said: “Bitcoin is an asset…” Here he threw a gigantic number of USD 250 trillion as bitcoin global marketplace value. This is a humongous number for me and I wish he backed it up with data analysis on how he can arrive at this number.

When asked about his opinion on whether it really matters if Bitcoin can’t be used as payment, min 12:19, this is when Robert Breedlove started rambling incoherent and irrelevant things. For the purpose to keep this essay concise and comprehensive, his rambling won’t be discussed.

In my opinion, money shouldn’t be treated as an investment commodity that can be traded and speculated like stocks. It will wreak havoc and chaos because our real income or salary will fluctuate with the fluctuation of the value of money that is being speculated daily if not every second in the financial market. The prices of goods will fluctuate swiftly too because the value of goods compared to the value of money will change accordingly as money fluctuates on the financial market. Therefore if Bitcoin or any cryptocurrency is going to become money to replace our current FIAT money, it shouldn’t be traded and speculated like an investment commodity.

People should be able to trust the money issued and rely on its value. Its value should be pegged to a fixed standard or at least it can’t fluctuate that much as often and as rapidly. And it shouldn’t be controlled by a few very powerful ruling elites.

I truly hope that this essay can help enlighten or give ideas so we can find a better solution for a sound monetary system for the sake of humanity and to end centuries of enslavement by the control of money by a few oligarchs.

It is ironic that Robert Breedlove who stated himself as the founder of The “What is Money” show doesn’t understand what money is, its function, its essence, and its valuation. At the end of this essay, the credibility of Mr. Robert Breedlove is questioned. As a satirist, I am really tempted to change his last name to Breedfraud. As a woman and an aspiring screenwriter and filmmaker, if I may give him a suggestion, I think he will do us a lot of favor if he changes his profession to an actor. I think many people will benefit, enjoy, and be given entertainment by his physical beauty if he becomes an actor instead. He can even act as a great con artist in movies that won’t create real damages in real life. His looks do remind me of Matt Bomer, the actor who played in the TV series ‘White Collar’. If you Mr. Robert Breedlove read this, please don’t take this as disrespect or that I am a misandrist or man-hater, but more of a compliment and suggestion to you.

Disclaimer: I’m not an economist, just a concerned global citizen who cares about the future of our world, our planet, and humanity.